Microsoft is on an all-out frontal attack against Zoom and Slack in the workplace collaboration market. While this is mostly being conducted through Microsoft Teams, the company’s Microsoft 365 plays a major role. Of course, Microsoft has promised to integrate Teams features with Microsoft 365.

Either way, Microsoft has rolled out a massive new update for Microsoft 365 customers. The focus of this upgrade is on meetings, but it seems Microsoft has thrown the kitchen sink at it. This is a beefy update laden with new tools. With that in mind, I’ll get right down to the business to describing the new features.

First up, Microsoft wants us to spend less time preparing for meetings. There is a new focus on allowing users to easily find the emails and files they need with minimum fuss. Meeting Insights in Outlook will allow users to see all the information they need about meetings in one app.

Specifically, emails and files can be placed in the event calendar to be retrieved easily. Also in Outlook, Microsoft says the inbox now surfaces more information on meetings. Users can efficiently move between meetings and messages, while also see attendee lists. This is important because it means users don’t need to send a Microsoft Teams link.

Joining online meetings is now easier, with Microsoft adding a one tap functionality. This is another example of Microsoft Teams and Outlook becoming more integrated with each other. It is worth noting this tool is only available in Outlook mobile for the time being. However, it does support other meeting services, such as Zoom.

Users can also create meetings online automatically. Specifically, this is achieved by setting “Join” as a default option in Outlook.

Microsoft is also pushing new abilities that help users make the most of their productivity time. Users can now sync their personal calendar in Outlook with their work calendar. When a personal event is added, Outlook on the web will automatically show those dates/times as busy when someone requests a meeting through the Scheduling Assistant. 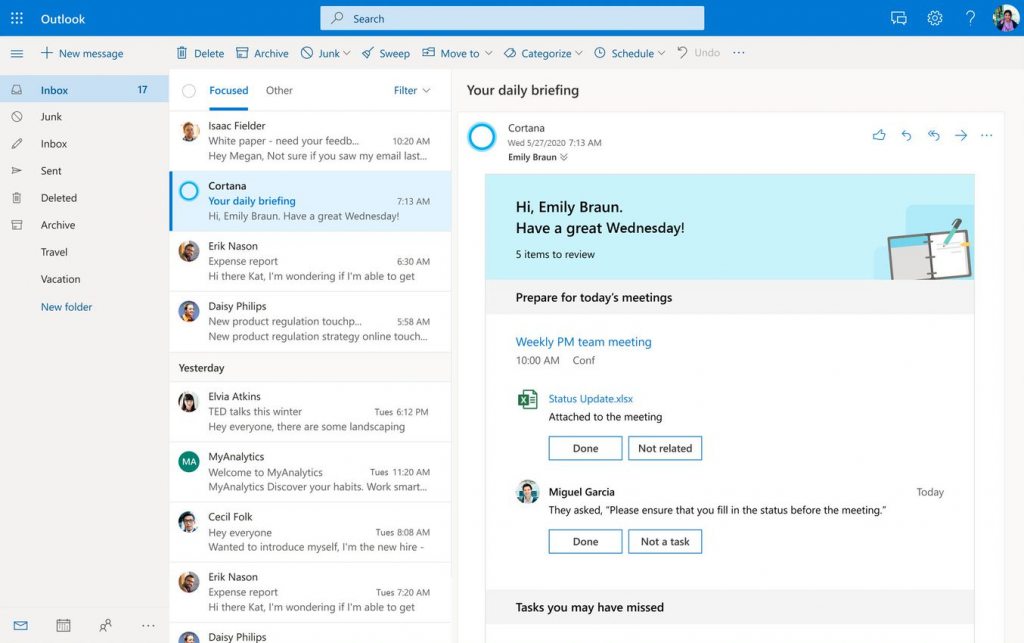 Scheduling is an important aspect of the new Microsoft 365 update. Microsoft says Outlook users can now schedule when they receive an email. For example, users can choose to not receive mails out of work hours, or during vacations.

Similarly, a new snooze feature allows workers to snooze a message. This is important for those emails that you want to take action on but don’t have enough time in the moment. One tool that I find interesting is the ability to highlight a custom part of an email text and add it directly to a task. This is the sort of time-saving feature that business users will love.

Cortana is not doing much for everyday users these days, but Microsoft has kept its promise of making her a productivity-driven assistant. In this latest update, Cortana can provide a briefing email to notify users of their day’s schedule.

There are a few other features Microsoft has debuted, so it’s worth checking out the full blog post for all the details.