Windows 10: How to Screen Record for Free without Recording Tools

With the built-in Windows 10 screen recorder you can capture the on-screen content of applications together with system audio as a video on your hard drive.

We show you how to create such a “screencast” using Windows 10 without additional screen capture software.

To record screencasts of applications and games as video, expensive software was still needed a few years ago.
Today you can just record your screen for free with Windows 10 by itself.
This is made possible by the so-called Windows 10-“Game Bar” which is actually a set of tools and no real bar anymore like in earlier versions.
Here we show you how to use this built-in Windows 10 screen recorder to capture the visible content and audio from apps or the entire screen.

How to screen record Windows 10 apps and games

Give the application you want to record focus by clicking its title bar once or activating full-screen-mode.

Then press the hotkey “Windows + G” to activate the Windows 10 Game Bar which is now called Xbox Game Bar. 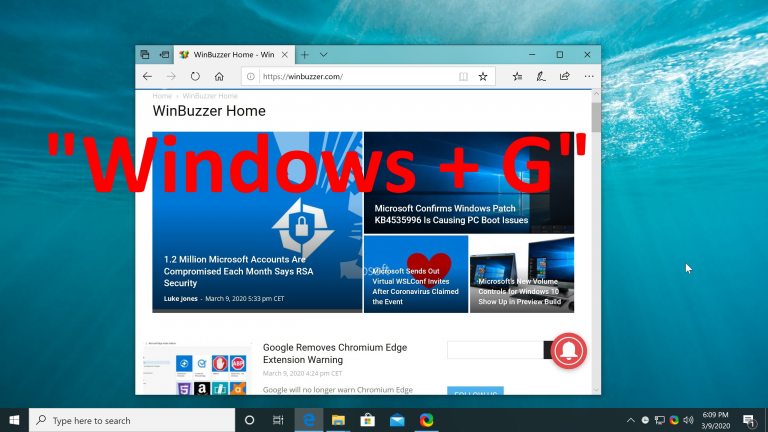 Unlike earlier versions, the Xbox Game Bar app now consists of several widgets that will be shown using a darkened overlay-screen. The audio widget allows you to set system audio or microphone as audio source and to adjust the desired volume level of all apps currently running on your system – just like in the normal Windows 10 audio mixer. 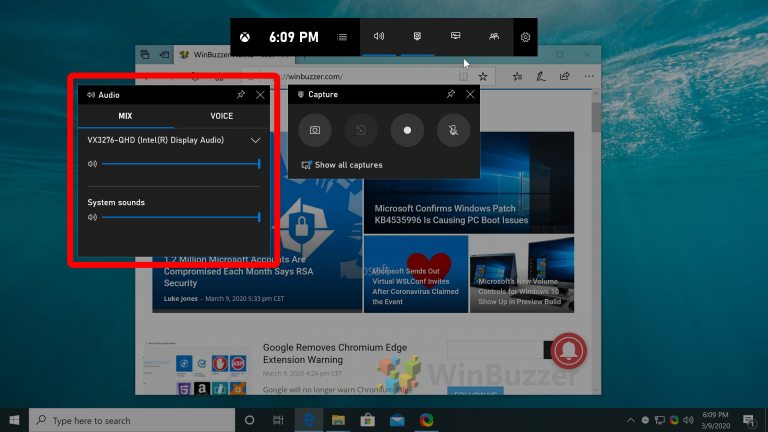 To start your Windows 10 screen recording, just click the round button in the capture widget. 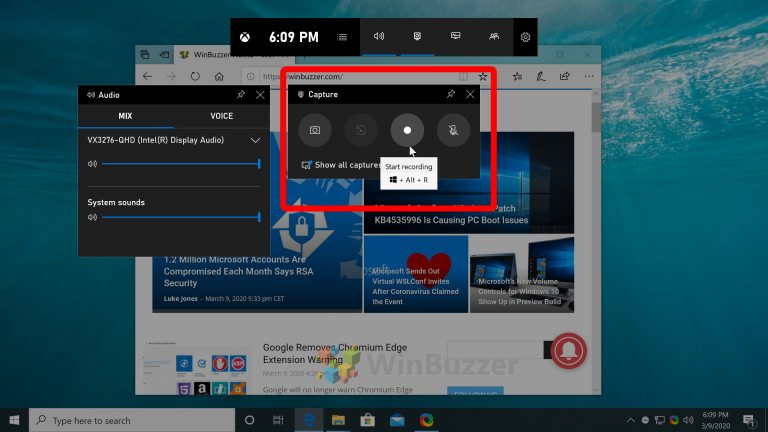 Once screen recording has started a small counter widget will appear. In game bar view you can toggle audio on or off and leave the Game Bar clicking somewhere while your screen capture is running. 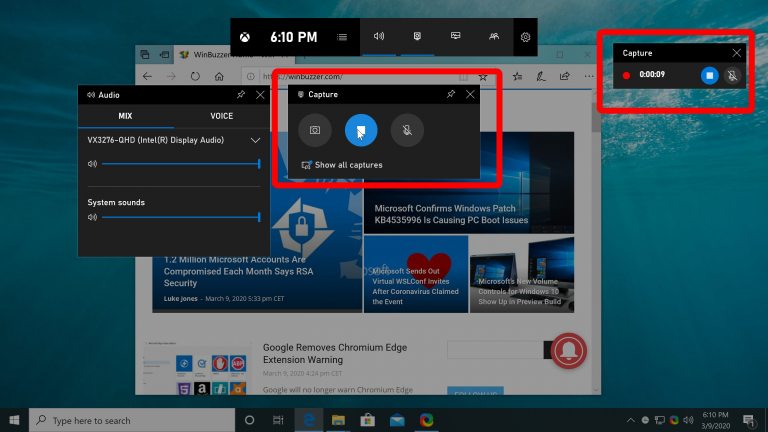 The screen capture counter widget will stay visible even after leaving Windows 10 game bar view,  but won´t show up in your screen recording video file later. Using the screen caputure widget you can stop the recording anytime and toggle sound on and off.

You will find the recording made with the Windows 10 screen recorder with File Explorer in your document folder under “\Videos\Captures”. 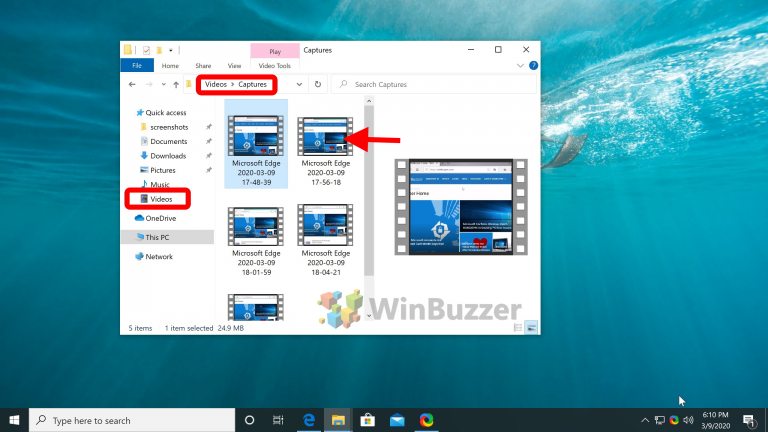 Alternatively you can access your Windows 10 screen recordings inside Game Bar view clicking on “Show all captures”. 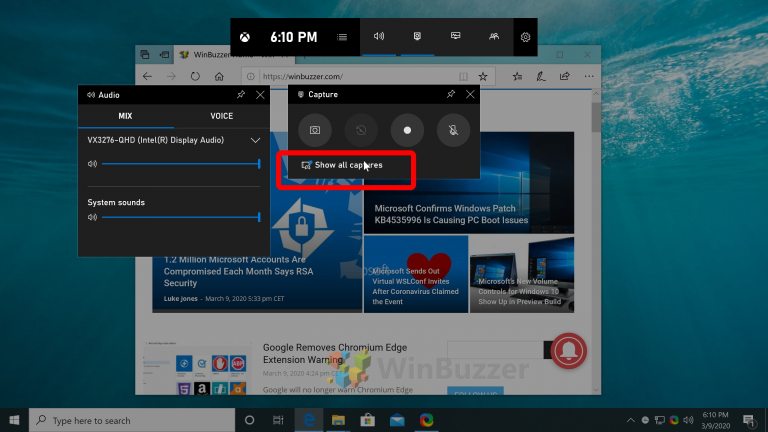 This will open a small gallery with an integrated player where you can quickly replay any of your Windows 10 Game Bar screen recordings. 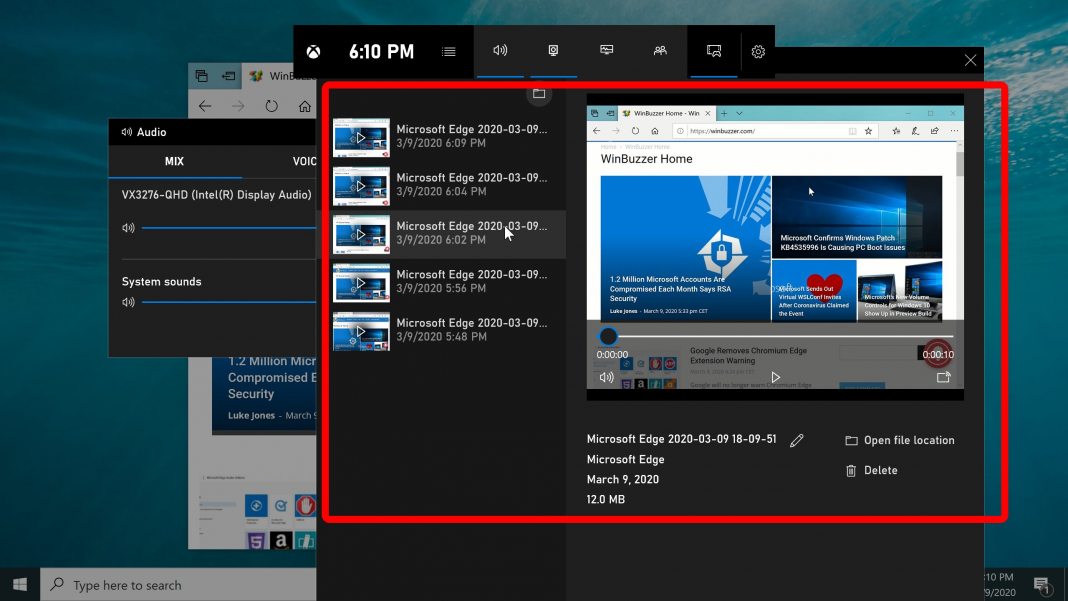