Methods for Migrating to Office 365

This article is an excerpt from the book “Office 365 for Exchange Professionals”.

Office 365 supports a variety of migration methods that customers can use. The choice of migration method can be influenced by a wide range of factors such as the number of objects involved in the migration, the amount of data to be moved to Office 365, the version of Exchange Server (if any) running on-premises, long-term migration or co-existence requirements, whether the organization uses non-Exchange email servers, and even the budget available to spend on the migration project.

The migration methods that are available are:

The next items to consider are the technical requirements, as they will often quickly eliminate some of the migration methods and allow the organization to zero in on the approaches that are actually possible for them to use. The diagram below provides an example of the decision making process you can work through based on your technical requirements to understand the available migration methods for your scenario. 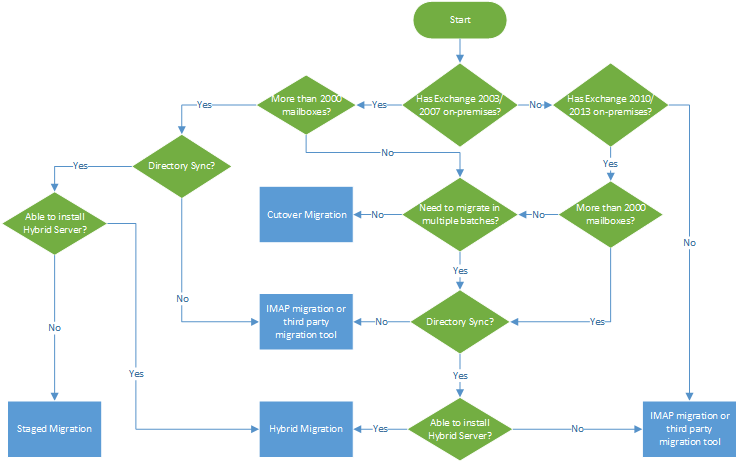 Real World: Although 2000 mailboxes is the threshold specified by Microsoft in terms of support for cutover migrations, it doesn’t mean that organizations with up to 2000 mailboxes should only consider a cutover migration. The logistics involved in handling an outage for a large number of users, as well as the desk-side support needed to assist with reconfiguring Outlook profiles and mobile devices after the cutover, may simply make a cutover migration too risky and complex for the organization. In fact, many experienced Office 365 consultants consider the practical limits of both the cutover and staged migration methods to be more like 150 mailboxes. Organizations larger than 150 mailboxes should give strong consideration to using a hybrid migration instead of a cutover or staged migration.

An organization running Exchange 2007 or higher can choose to take advantage of the free “Hybrid Edition” license available from Microsoft. This allows an Exchange Server 2013 or Exchange Server 2010 SP3 server to be deployed in the organization to host a hybrid connection with Office 365. The Hybrid Edition license can’t be used for a server that hosts mailboxes, but the server can be used during the migration to Office 365 and retained afterwards for managing the Exchange attributes of the on-premises Active Directory objects, and can also be used as an SMTP relay server for applications or devices on the corporate network.

If the implementation of a Hybrid Edition server is not possible, for example due to server capacity constraints, then a staged migration is the way forward.

Finally, businesses using non-Exchange email platforms can’t use the cutover, staged or hybrid options. For those businesses Microsoft provides an IMAP migration option for moving mailboxes to Office 365, or alternatively a third party migration tool can be used.

As you can see, the decision making process requires careful consideration even just for the technical requirements. Beyond that there are also other factors such as whether the migration project will be handled in-house or by an external consultant, whether extra training is required for IT staff to understand new features such as hybrid configurations, and whether funding is available to pay for third party migration tools if native migration options can’t be used.

Note: Before you finalise your decision on which migration method to use it is strongly recommended that you read through the example migrations in this book from start to finish so that you can learn about any risks or timing issues that you need to be prepared for. Do not start a migration before you have read through the process from start to finish at least once. You should also consider creating a test environment and signing up for a separate Office 365 trial tenant so that you can perform a hands-on test run of your chosen migration method.