Keeping up with all the changes in Office 365 is practically a full time job. It’s neither simple nor easy, and has created quite a lot of “change fatigue” amongst the IT pro community. Even the people in the community who try to catch and share all the changes going on get fatigued. It’s hard to sustain the effort.

I originally wrote this blog post in January of 2017. But I recently answered a question elsewhere about how to stay up to date and manage all the changes occurring in Office 365 and other cloud services such as Azure Active Directory. Some of the answers I gave to the person who asked were not covered in my original blog post here, so I’ve now updated it with the new information.

Dealing with Change in the Cloud/SaaS World

In a traditional IT model, before cloud services came along, change control was something that many organizations relied on quite heavily. Any change to IT systems that could impact end users, whether it was regular maintenance or the roll out of a new product or feature, went through a rigorous process involving many stakeholders, project managers, change managers, and communications people. Nothing happened without a high level of scrutiny and a carefully worded email communication to the user population.

Then the cloud arrived, and organizations embraced services like Office 365 for a variety of reasons. Migration projects got underway, and stakeholders rejoiced at the cost savings, or simpler administration, or better security, or whatever benefits they sought from their adoption of cloud services.

Then one day, users get an email like this. 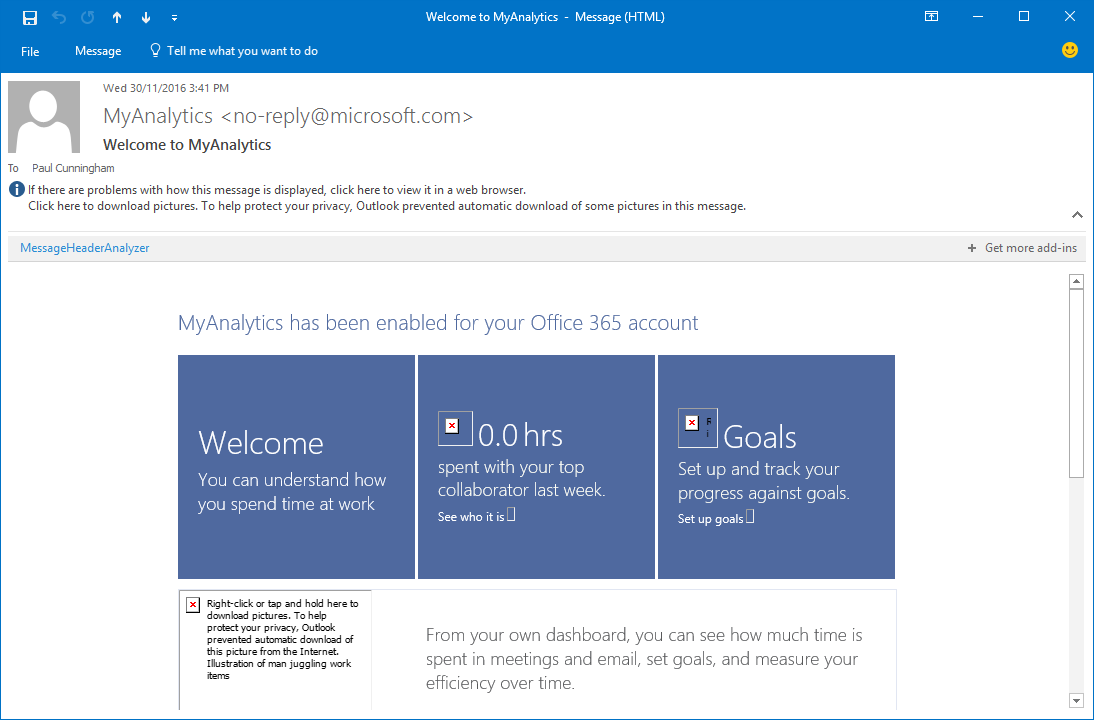 Or instead of a MyAnalytics email, a Clutter folder appears in mailboxes and messages are delivered there instead of the inbox. Or the UI for the OneDrive sharing experience changes.

For organizations that are used to that strict change control process, the reaction is often…

We didn’t approve this!

Change control certainly has value. An email like the MyAnalytics notification above can create a burden for support staff, particularly the help desk staff at the front line of most IT support hierarchies. What is this email? Is it legitimate? Do I need to do anything? Can my boss spy on me? I don’t want this! How do I turn it off?

The Challenges of Managing Change in Office 365

With everything going on in Office 365 and other Microsoft cloud services there are a few challenges that we face as IT pros and customers:

I’ll go through each of those challenges and provide some advice for how to address them.

Microsoft does have some history with rolling out changes without notification, such as the change to Exchange Online license removal behavior, or throwing up a new Office 365/Azure sign-in experience to users with zero prior notice to customers. But for the most part, change is communicated well and customers are provided with controls to manage those changes. The MyAnalytics notification above, as an example, was:

So, I don’t have any real excuse for not knowing about that change. But that doesn’t mean it’s not still a challenge dealing with it.

Message Center is the primary channel for Microsoft to communicate changes that are relevant for your specific Office 365 tenant. Visiting the portal on a daily basis is not a habit of mine though, and many other admins say the same thing. Message Center now has a weekly email digest if you prefer to have updates sent to your inbox.

The Office 365 roadmap is a difficult tool to use for tracking changes. There’s no native functionality in the roadmap to keep you alerted as items move from “development”, to “rolling out”, to “launched”. However the unofficial roadmap watch website has an RSS feed you can subscribe to and be alerted to any change in roadmap item status. There is also the Office 365 weekly blog, which is run by a Microsoft employee. That blog is official in the sense that a Microsoft employee is posting to it, but if that person changes roles or leaves the company it will probably go away.

The Office 365 roadmap doesn’t cover everything though. For other announcements related to Office 365 such as changes occurring in Azure AD there’s an extensive list of blogs and forums where announcements are made on the Office 365 change management survival guide. That list is probably a bit excessive and contains some duplication, which adds to the burden of trying to track all of the change that’s going on. But you can use it to build a personal list of RSS feeds to follow.

Aside from blogs there are also a series of Microsoft documentation pages such as What’s new in Azure Active Directory, the Azure AD Connection version release history, and What’s new in Microsoft Intune to follow.I was previously using an online service called Change Detection to track individual documentation pages on TechNet for changes. That service has now shut down. The new Microsoft Docs platform allows you to follow pages as RSS feeds, but not all docs pages advertise that. As an example, the what’s new in Azure AD page has a link to their feed at:

Unfortunately there’s no single source of truth for Office 365 changes that you can keep an eye on, so tracking multiple sources is necessary.

Dealing with the Volume of Changes

Once you’ve dialled in a good set of resources that are relevant to your organization’s usage of Microsoft cloud services, the next challenge is dealing with the number of changes happening at any given time. At this time I’m writing this, the Office 365 roadmap has 74 changes rolling out, and another 194 in development. That’s a lot of activity to track. Even if some of those changes are minor and not much of a risk of disrupting your users’ habits, you still need to review them all. 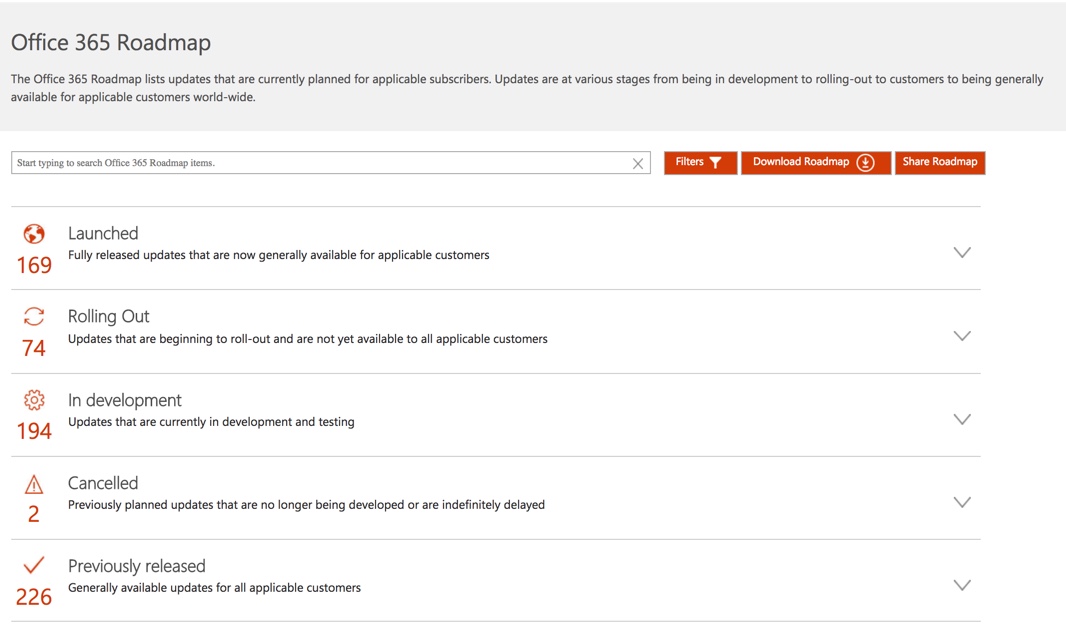 There’s no magic solution to this. You just need to invest time in reviewing upcoming changes, working out how relevant they are to your organization, and then planning for the change. With so many changes rolling out it’s easy to lose track of them, which is why I recommend implementing a system to handle that for you. Some people use their own job ticketing system, or a Trello board. Microsoft Planner is also a good system for managing changes, as they are effectively a perpetual running project. There is even a blog post series on MSDN for setting up Azure functions using PowerShell to automatically add new Message Center items to Planner.

Controlling the Timing of Changes

In the past there have been many instances of significant, user-impacting changes rolling out in Office 365 without any administrative controls. The initial rollout of Clutter in Exchange Online is one example. But for the most part, change is communicated well and customers are provided with controls to manage those changes. The precise timing of the change is still an unknown in most cases, but if you can opt-out of the rollout of a feature at first, and then manually enable it later when you’re ready, then that is ideal. Most changes roll out as on by default though, so you do need to stay on top of things. The MyAnalytics notification above, as an example, was configurable by administrators. 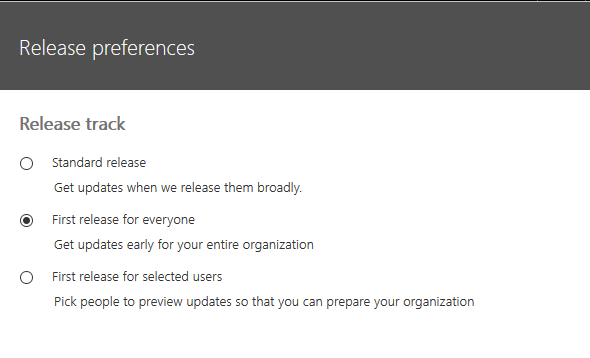 If you’re responsible for managing change in Office 365 for your organization then I recommend the following:

Most importantly, allow yourself or your team the time to discover, review, and respond to upcoming changes.